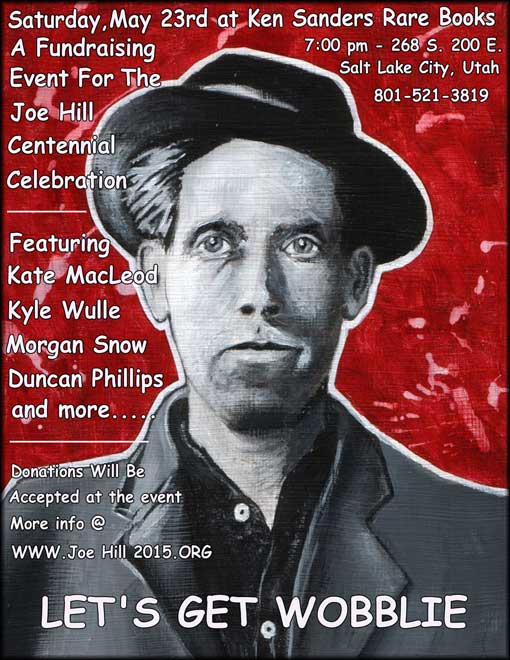 Let’s Get Wobblie: a fundraising event for the Joe Hill Centennial Celebration. Live musical guests include Duncan Phillips, Kate MacLeod, Kyle Wulle, and Morgan Snow. Ken Sanders Rare Books is pleased to announce a live concert with Duncan Phillips, Kate MacLeod, Kyle Wulle, and Morgan Snow on Saturday, May 23rd at 7:00 pm at our downtown bookstore (268 South 200 East, SLC, UT). Please join us for a night of music and storytelling. This event is a fundraiser for the Joe Hill Organizing Committee for the Joe Hill Centennial Celebration (http://joehill2015.org/). Donations will be accepted on the night of the event. You may also visit the official fundraising website to make a donation: http://joehill2015.org/donate/ The Joe Hill Organizing Committee is creating events in Salt Lake City, Utah, to celebrate the life of Joe Hill on the 100th anniversary of his death. The Organizing Committee’s big project is an all-day concert over Labor Day weekend. Joe Hill was a Swedish immigrant, a songwriter, a worker, and a member of the Industrial Workers of the World (IWW), or “the Wobblies”. He was a prolific songwriter for his union, which contributed to the IWW’s growth in the early 20th century. While working in Utah, Joe Hill was accused of a double homicide, which he likely did not commit. Despite an international campaign to save him, which included the Swedish ambassador, Helen Keller, and President Wilson, he was still executed for those murders. The State of Utah easily condemned Joe Hill and his union as troublemakers. Joe Hill died a labor martyr in 1915. The prison site where Joe Hill was shot is now a public park, where the Labor Day concert will be held. The Joe Hill Organizing Committee is a 501(c)(3) tax exempt charity dedicated to celebrating the life and legacy of Wobbly activist and songwriter Joe Hill. All donations go to fund projects and events during 2015, the 100th anniversary of Joe Hill’s death. Duncan Phillips is the son of Bruce "Utah" Phillips (“The Golden Voice of the Great Southwest”). After his dad's death in 2008, Duncan inherited his father’s old road-worn Guild guitar along with the songs and stories of the people and places that his father wrote about over his forty plus years of wandering the country. Since her first recording in 1995, Kate MacLeod has performed regularly from stages in formal concert halls to those at outdoor festivals across the country. Kate has been compared to many of the influential artists of her genre from Emmylou Harris to Richard Thompson and Loreena McKennitt. Guitarist and singer/songwriter Kyle Wulle is a former Wobblie and board chair for Utah Jobs With Justice. Guitarist and singer/songwriter Morgan Snow incorporates insightful, poignant lyrics, with a powerful and soulful voice reminiscent of traditional country music like Johnny Cash or Waylon Jennings while pulling from other influences from the likes of Pink Floyd and Pearl Jam. For more information about this event, please contact: Ken Sanders Rare Books | 268 South 200 East, SLC, UT | 801-521-3819 | books@dreamgarden.com | www.kensandersbooks.com | Facebook: Ken Sanders Rare Books | Twitter: @kensandersbooks