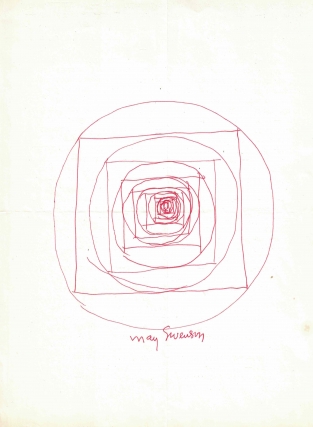 May Swenson
Poetry is Pleasure
by Ken Sanders

"In 1913 Swedish emigrants Dan and Margaret Swenson gave birth to a daughter in Logan, Utah. The slender, pale, blue-eyed blond could memorize and recite long poems by the age of three, but spoke only Swedish until she entered first grade. Growing up with a natural curiosity in the large and friendly Swenson family, May developed a keen sense of observation. In the high mountains, the beautiful Cache Valley, and the surrounding Bear Lake country, she discovered a lasting
appreciation of nature – though she remained terrified of water and never learned to swim.
Painfully shy and reticent in public, in private she was passionate and articulate. When her cousin “Sunny” read a page of the twelve-year-old’s journal, she quickly recognized that May had already begun making poetry, even if she didn’t know what it was. At age twenty-three, in the depths of the Great Depression, May left with Sunny on a trip to seek “myself and beauty.” She found both, and the independence she cherished, in New York, where she would live for the rest of her life. “I would not like to be married to any man,” she explained, “but only be myself.”
She was independent, but not isolated. She played chess with Marcel Duchamp and read one of her poems to Robert Frost. Never without a cat, she had three female lovers over the course of her life, spending twenty-two years with her final partner, Rosanne “Zan” Knudsen. She and Zan explored the world around their summer cottage (named Kestrels' Nest) overlooking the ocean in Sea Cliff, Long Island. She had a lifelong passion for nicknames and naming things. Though she never had
children, her three collections of “riddle” poems became popular with younger audiences.
She admired Emily Dickinson, as well as E.e.cummings, John Donne,William Blake, and others. But while she might learn from them, she knew that their way was not hers. “If I liked any poetry better than my own,” she responded to a question about her favorite American poet, “wouldn’t I try and write that way?” Likewise, while she respected her family’s Mormon beliefs, she had little interest in any organized religion for herself. “It’s not for me—religion,” she said. “It seems like a redundancy for a poet.”
Overcoming her fears, Swenson forced herself to give readings in the East. While she shared the concerns of her peers, she remained true to herself. “One must be honest somewhere,” May wrote in “The Truth Is Forced”;“I wish to be honest in poetry.” Like Ginsberg, Kerouac, and other “beat” poets, she questioned her society’s attitudes toward money and social mores, but she never adopted the beats’ anger and vehemence.
A feminist and a lesbian, she refused to participate in “women’s only” readings because she believed that poetry could not be defined as male or female. Poetry was, she wrote, “based in a craving to get through the curtain of things as they appear, to things as they are, and then into the larger, wilder space of things as they are becoming.” With her keen powers of observation, her inquisitive nature and formidable intellect, May could construct meaningful poetry out of any raw material. Nature was one of her many muses. While Swenson
published 59 poems in The New Yorker and became one of America’s most widely anthologized poets, she never forgot her Utah roots. A 1966 homecoming may have been the only reading she ever gave where she was not terrified. She lies in the Logan cemetery, beneath a granite bench with an epitaph from her poem, “The Exchange”: “I have spent my life
having fun. To make poetry is pleasure.'"
© Ken Sanders
#womenshistorymonth