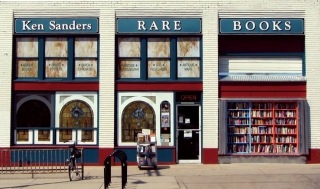 KSRB appreciates the outpouring of support from the community regarding the recent article in The Salt Lake Tribune (link above) concerning our future.

“Through Cosmic Aeroplane Books and Records, Dream Garden Press, and Ken Sanders Rare Books, I have been operating a retail bookshop and publishing company in downtown Salt Lake City for the past 45 years. For almost a quarter of century, our bookshop at 268 South 200 East has been my public face to the community.
Over the past two plus decades we have sponsored hundreds of author readings and signings, poetry events, concerts, political events and even, during the Salt Lake Olympics, ‘Brigham Young: The Psychedelic Years.’ We have hosted many local authors, including Trent Harris, Pat Bagley, Will Bagley, Scott Carrier, Terry Tempest Williams, Alex Caldiero, Amy Irvine, David Lee, Ken Brewer, Gino Sky, Katie Cole, Paisley Rekdal, Scott Abbott, Ralph ‘Teach’ Elrod, Nancy Takacs, Sandy Anderson, Hector Ahumuda, and Andy Hoffman.
We've brought in lots of regional and national authors as well, including Gary Snyder, Wendell Berry, John Dunning, Craig Childs, Joanne Kyger, Anne Waldman, Rick Bass, Charles Bowden, Ray Obermayr, Martin Vest, Ken Babbs, Ed McClanahan, Robert Crumb, Edward Abbey, and so many more!
Musically we have hosted Kate MacLeod, Utah Phillips, Katie Lee, Rosalie Sorrells, Emmanuel Tellier, Duncan Phillips, Tom Russell, Anke Summerhill, and Doug Wintch, to name just a few.
Artshow appearances have included Leia Bell, Trent Call, Sri Whipple, Dana Costello, Carel Peter Brest Van Kempen, Marc & Carolyn Buehner...
It's been a great run. Within the next two years, our building and most of 2nd East and Broadway from 2nd East to Edison Street will be torn down to make room for a new development. We do not yet know our fate. To replicate our existing size, we would need from 4,000-5,000 square feet. That would likely cost $8,000-$10,000 a month. Not affordable, not sustainable. And in you throw in new construction, the likely cost would be more like $25 per square foot. Far beyond what we could possibly afford.
I am looking at all the possibilities and have been for the past five years. I am not capable of going forward by myself. So what I'd like is input from the community. Do the denizens of SLC even care or desire to have a large retail new, used and rare book shop in their midst? Do we care anymore? If the answer is yes, I think we need to ask hard questions of our community leaders about what they are doing to make local home-grown business viable and sustainable.
The mayor, the City Council, the state legislature and our governor and government should be asked the hard questions. What do we value and what do we as a citizenry wish to use our tax dollars for? Why is it okay for the Governor and state legislature to give $5.5 million dollars to Jeff Bezos and Amazon--with West Valley City throwing in another $3.5 million dollars--in the form of tax subsidies to bring in a multi-billion dollar out-of-state corporation? These funds are taxes paid by the people to the government. If it's such a good idea to support out-of-state corporate behemoths with taxpayer subsidies, why isn't there a local fund set aside to help Utah's own home-grown businesses prosper? Most of the funds we generate (as small businesses) stay in the state, while the large corporations suck the money away from the state. What is fair or equitable about this?
Perhaps no one cares about local independent bookstores like KSRB, Weller Book Works, Benchmark, or The King’s English anymore. Local government is responsible for issuing these building permits and tax breaks to billionaire corporations. What are they doing for those of us locally running book stores or boutiques or restaurants or bodegas? We appear to be tearing down the city block by block. Both residential and business property prices are out of control. What will our city become in the next ten years?
In the words of a fictional character from the late Edward Abbey's novel, Fire on the Mountain; ‘Why does progress always have to progress over me and the coyotes?”’
- Ken Sanders