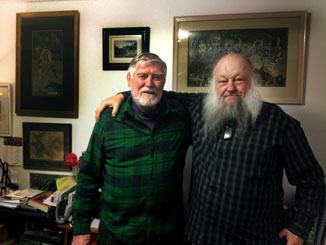 Ken Sanders Rare Books is pleased to announce an exhibition of the collage artwork of Ernesto Edwards, opening at 6:30 PM on Friday, May 16th for Gallery Stroll at our downtown bookstore (268 South 200 East, SLC, UT). We will have twelve original collage works by Ernesto Edwards on display and for sale. The artwork will remain on exhibition until June 18th. This event is free and open to the public.

Ernesto Edwards’s collage works are currently included in the acclaimed travelling exhibition (showing in California, New York, and D.C.) and accompanying exhibition catalogue (published in 2013 by Pomegranate Press, [available at our bookstore for $65]) entitled “An Opening of the Field: Jess, Robert Duncan and Their Circle”. “The refined, subtle collages of Ernesto Edwards (b. 1933) were completed by the early 1970s and have rarely been publicly exhibited. Edwards was born in Salt Lake City, Utah, and although he had little exposure to art and culture growing up, his grandmother brought home projects for him from her third-grade classroom and also encouraged him to past cut-out pictures into scrapbooks. In 1962, a few years after graduating from the University of Utah, he visited San Francisco, where he met the poet Lewis Ellingham and Ellingham’s friend Gail Chugg. They took “Ernie” (as Edwards was known in those days) to Katy’s Bar in North Beach, where he was introduced to the poets Jack Spicer and George Stanley. After quitting his job in Salt Lake City, Edwards returned to San Francisco, staying again with Ellingham and Chugg in Harwood Alley on Telegraph Hill. During his first week after returning to the city Edwards went to the San Francisco Museum of Art and saw an exhibition of works by Jess, Bruce Conner, Lawrence Jordan, and other California “assemblage” artists. He was extremely interested in everything in the show but especially noticed collages by Jess. “I encountered Jess’s work for the first time there, which really inspired me,” he said. “I went back to Salt Lake City and started cutting up magazines, Life, and anything with pictures in it. Somehow Jess’s work made me think that I could do collage too.” When he showed his first attempts at collage to Bill McNeill, Tom Field, and other new friends, they urged him to continue his work. Edwards made collages throughout the 1960s, producing about one hundred. A great resource for him was McDonald’s, a huge bookstore on Turk Street, where he found usable old magazines. He brought stacks of them home and immediately began cutting out images and laying them on a long table. “I wasn’t the least bit intellectual about the material; I just chose pictures which drew me somehow,” he said. Edwards accumulated many boxes of images, which he carried with him wherever he moved. For a time Edwards wrote poetry, which was praised by Robert Duncan but was not liked by Jack Spicer, who told him not to be a poet. A friend of many of the writers in San Francisco in the 1960s and ‘70s, Ernesto sometimes drove an inebriated Spicer home from North Beach in the early morning hours. Edwards first showed his work in 1964 in the energetic Buzz Gallery on Buchanan Street, run by Paul Alexander and Bill Brodecky Moore. A year or so later he was in a three-person show at “Mostly Flowers,” a gallery managed by David Young Allen in the airport bus terminal downtown. And in the late 1960s Edwards and Bill McNeill presented their works in an in-home exhibit on Natoma Street; Robert Duncan attended and bought pieces by both artists. Although Edwards’s collages are mostly in private collections and thus not widely known, they are some of the most visually engaging and appealing works produced in this period. Edwards’s earliest collages are entirely black and white, but later he began to use color, with images of men, bathing beauties, animals, Buddhas, and flashes of lightning in the night sky. One of his first works, Putting on the Eyes, was purchased by Robert Duncan, who may have been drawn to it for its poetic quality and Jess-like density. Edwards in a quiet way has been a loyal friend to, and supporter of the painters in this exhibition [“An Opening of the Field: Jess, Robert Duncan, and Their Circle”. With some of his salary received from his job a San Francisco General Hospital, where he worked for many years, he bought art by Paul Alexander, Tom Field, Bill McNeill, Fran Herndon, Nemi Frost, and others. His kind and modest nature has also helped to keep the lines of communication open between these and other artists. He now lives in Salt Lake City. During an interview in 2010, Edwards commented, “It’s exciting to see what happens when you put the images of a collage next to each other. It’s a view into another place.” (Citation: p. 188-189, An Opening of the Field: Jess, Robert Duncan, and Their Circle edited by Michael Duncan and Christopher Wagstaff, Pomegranate Press (Portland, OR), 2013) Please follow the links below to view or promotional images of the author and book: https://www.dropbox.com/sh/6ay1weqnmiazq9e/wMTpZLvlSS For more information about this event, please contact: Ken Sanders Rare Books | 268 South 200 East, SLC, UT | 801-521-3819 | books@dreamgarden.com | www.kensandersbooks.com | Facebook: Ken Sanders Rare Books | Twitter: @kensandersbooks