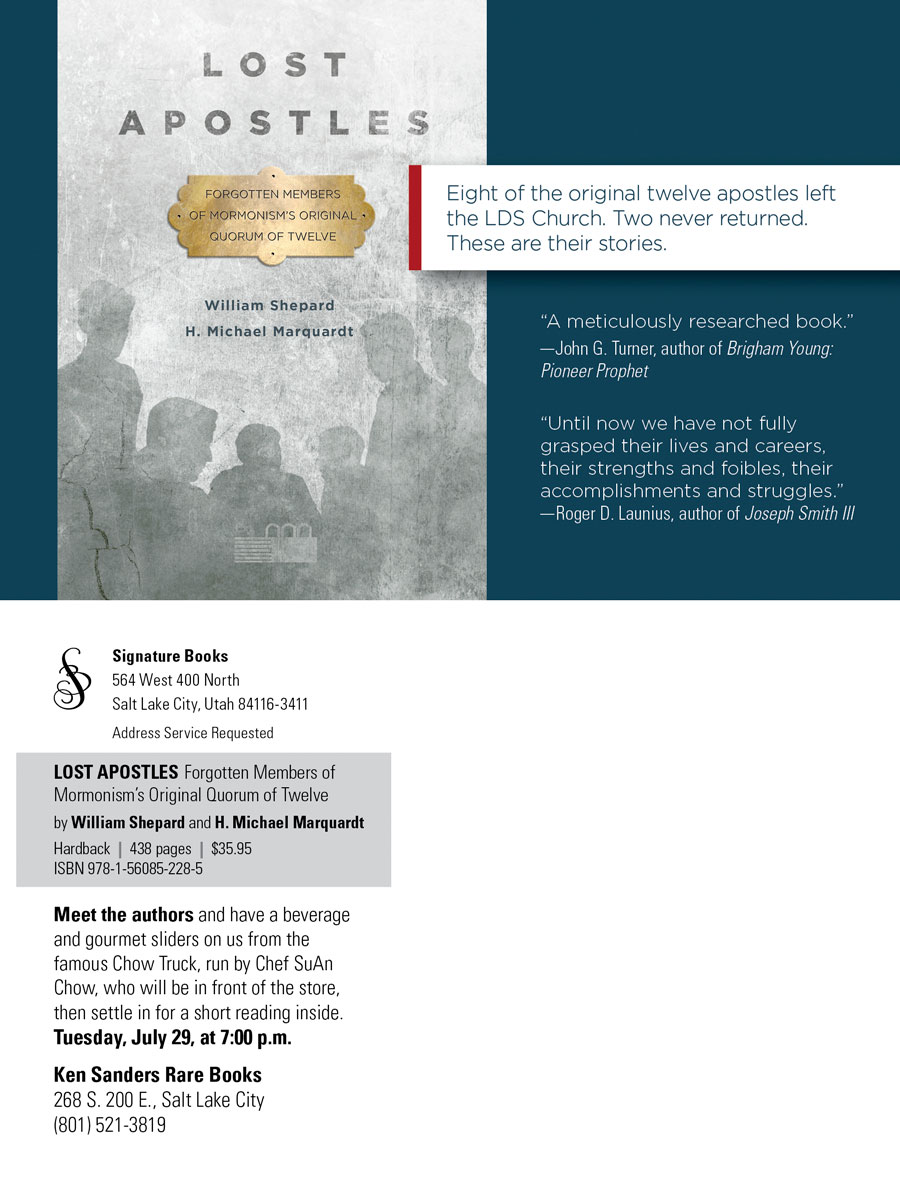 Lost Apostles: Forgotten Members of Mormonism’s Original Quorum of Twelve Ken Sanders Rare Books is pleased to announce a reading and book signing with William Shepard and H. Michael Marquardt on Tuesday, July 29th at 7:00 pm at our downtown bookstore (268 South 200 East, SLC, UT). Shepard and Marquardt will be reading and telling stories from their new book, "Lost Apostles: Forgotten Members of Mormonism’s Original Quorum of Twelve”. Copies of the book will be available for purchase and signing (Signature Books, Hardcover, $35.95). Meet the authors and have a beverage and gourmet sliders on us from the famous Chow Truck, run by Chef SuAn Chow, who will be parked in front of the store, then settle in for a short reading inside. This event is free and open to the public. Before the LDS Church was organized, Joseph Smith received a revelation telling him that twelve men would be called as latter-day apostles. Their assignment would be to warn men and women that the end was near. Although the determination of who would fill these positions was delayed for five years, when it finally happened, God reiterated that these men were to “prune the vineyard for the last time” because the Second Coming was nigh. In fact, “fifty six years would wind up the scene,” they were told. Of the twelve men selected, nine would eventually be pruned from the vineyard themselves, to varying degrees. Seven were excommunicated, one of whom was reinstated to his position in the Twelve. Of the other six, the subjects of this book, none returned to the apostleship and four never came back to the Church at all. Those who left faded into obscurity except for when they are occasionally still mentioned in sermons as cautionary tales. But two of them made their marks in other areas of society, John Boynton becoming a successful dentist, a popular lecturer, geologist, and inventor with dozens of important patents to his name, while Lyman Johnson became a prominent attorney and business owner. Even though Luke Johnson, Thomas B. Marsh, William McLellin, and William Smith became religious wanderers and tried unsuccessfully to adjust to life outside of the Church, their experiences were interesting and comprise valuable case studies in belief and disaffection. William Shepard is a past president of the John Whitmer Historical Association and has published in Dialogue: A Journal of Mormon Thought, theJohn Whitmer Historical Association Journal, and the Journal of Mormon History. An elder in the Church of Jesus Christ of Latter Day Saints (Strangite), he is active in the Burlington, Wisconsin, branch that was founded by James Strang in 1844. Shepard is a retired school teacher, holds a master’s degree in history, and is a former sergeant in the U.S. Air Force. H. Michael Marquardt is an independent researcher and writer, the author of The Book of Abraham Revisited, Inventing Mormonism: Tradition and the Historical Record, The Joseph Smith Revelations: Text and Commentary, and compiler of Early Patriarchal Blessings of the Church of Jesus Christ of Latter-day Saints. To purchase a copy of the book, please go here: http://www.kensandersbooks.com/shop/rarebooks/39880.html Please follow the link below for more information on the authors and the book: http://signaturebooks.com/2012/09/lost-apostles-forgotten-members-of-mormonisms-original-quorum-of-twelve/ For more information about this event, please contact: Ken Sanders Rare Books | 268 South 200 East, SLC, UT | 801-521-3819 | books@dreamgarden.com | www.kensandersbooks.com | Facebook: Ken Sanders Rare Books | Twitter: @kensandersbooks